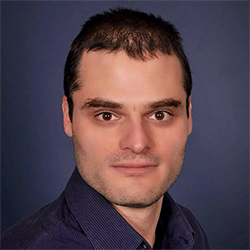 Nikolaos Flitris started his career as a Software Developer intern at HSBC Paris. He has worked several years at Eredi Research & Development SA in Greece, starting as an administrative assistant for coordinating and managing various activities of studies for environmental impacts and feasibility studies of Greek municipalities. He then worked as a Software Developer, CAD mechanical designer and finally as a Software / Automation Control Engineer. He was responsible for the implementation of projects in Industry and Energy sectors, which were co-funded by the Hellenic State under National Research & Development programs.

Nikolaos continued his career as a Francophone ICT Consultant at European Dynamics SA in Greece working in the E-Governance section of the patents’ offices of the Belgium, Netherlands & Luxembourg (BENELUX) countries. Subsequently, he started working as a contractor Software / Automation Control Engineer at Future Environmental Technologies Group in the UK, in the implementation of research projects which are related to industrial waste filtration. He has also worked at SIEMENS in the UK as Software / SCADA Engineer, developing software for the Qatar Education City. Projects undertaken at this organisation were directly related to Power SCADA Design, Development & Commissioning for Network Rail & London Underground.

Nikolaos Flitris obtained his Diploma in Engineering from University of Thessaly and his Master of Research in Medical Robotics & Image Guided Intervention from Imperial College London. He has also attended the CISCO CCNA seminar for IT Networks.

His educational and professional backgrounds have equipped him with the prerequisite skills and knowledge to be able to work in the areas of Software Development, Information and Communications Technologies, Automation Control and Robotics, Banking, Industry, Energy, Railway and Healthcare sectors.